Reporting on rumors on speculation is hard, but someone’s gotta do it. And when it comes to Apple rumors and speculation, there’s so much new material to choose from every day that following new rumors and quick retractions has become a job by itself.

I want to give back to the community of Apple reporters, industry analysts, Digitimes editors and content scrapers by releasing a handy Keyboard Maestro macro that makes it extremely easy to build headlines for the next unreleased Apple product with a few keystrokes. In my opinion, this macro is a work of beauty – several beta testers chimed in saying it looked better than the teardrop iPhone 5. So that’s something.

The macro in itself is fairly simple. Sharing the same underlying foundation of the Keyboard Maestro Markdown Library, it takes into account four variables: Product Name, Release Date, Post Kind, and Comment. The first beta of the macro didn’t include a “Comment” field, but since it was leaked to a rumor blog which posted a screenshot gallery of it, I received many unsolicited suggestions to implement it, so I did. 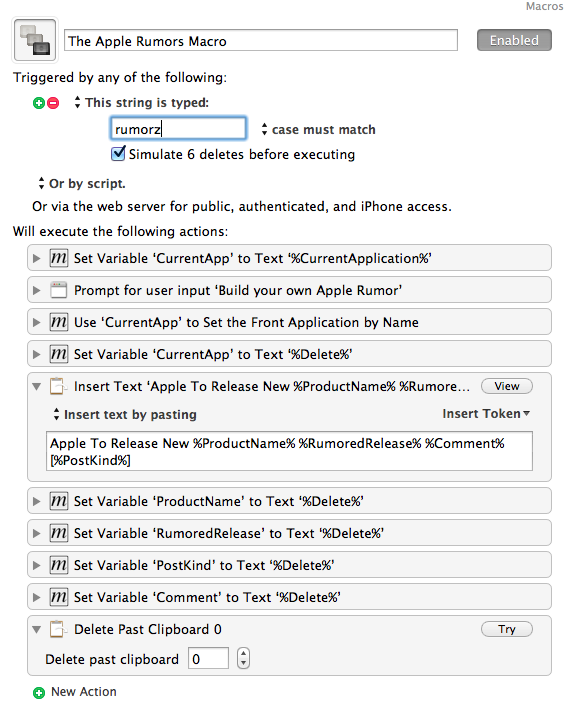 You can modify the macro to your own needs – you can remove the Comment variable if you fancy simpler, easily Techmeme-able headlines more – but keep in mind that, out of the box, it can be triggered by typing the “rumorz” string in any app. This will open a popup panel to insert your title values; hit Okay, and then BAM! – instant headline generation.

I haven’t used the macro myself a lot, but I believe it can help the community save a lot of keystrokes.

For any suggestions or ideas, feedback is welcome.

As the principle goes, among three favorable options only two are possible at the same time. Rethink core functionalities, Offer major new user features, Keep developers happy: Pick two. I like the refinements of iOS 6. I don’t care... Continue →